March 22, 2013
I haven't been blogging regularly. As one of my six readers you might have noticed. I'm not sure exactly why, but I needed a break. Maybe it's gotten stale. Maybe it's that I'd rather be coding than writing, and if I write I want to write about code.

I'm working on a side project: autosave for Meetup, blogs, and Disqus. It's a pain in the ass to lose a post, so I've built a plugin that saves my stuff to the browser, and just for fun saves it to Ye Olde Cloud.

It's not a business, it's scratching an itch.

In October --when I first started this and put it down when it basically worked --I lost a long email to one of my meetups I manage. Meetup doesn't offer a basic autosave like, say, Blogger does, or Drive. Even Disqus has a basic autosave.

The problem, though, is that it's very easy to trip over the keyboard and navigate to a previous site. 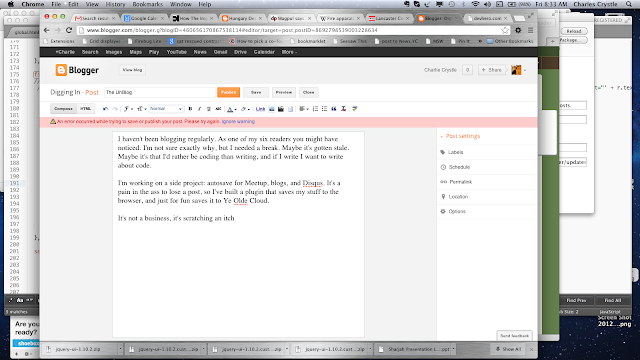 The other reason I'm into it is because it's forcing me to think through some coding practices ( if I were smart I wouldn't be coding at all ) and challenges before I get back into the collaborative search app formally known as Jawaya.

I currently have no intention of releasing anything, ever, because of my low self-esteem around my dev abilities (semi-joking), but I'm very much into learning Node, mongo, bootstrap, and indexing techniques because maybe I'll play a developer on TV; I'm a method actor.

So Autosave: it's a silly little plugin for Safari and Chrome. Works with Meetup, Blogger, Typepad, Tumblr, and maybe Disqus (they keep changing stuff so it's a pain). Let me know if you want to try it sometime--I should be finished this weekend.

There--I blogged. That's about 10 lines of code I don't have to debug now.