November 02, 2012
One of my biggest influences in life was my Dad, who died on this day in 1996. We started Versicom together with my co-founder, who, quite tastefully, quit the day before Dad died of esophageal cancer saying something about my Mother that you can learn about in the book. It was an ugly thing that ended up with the police escorting him out of the building, and me finally going home to see Dad on his last full day.

For the past 16 years, I've never really properly grieved, opting for suppression and other methods of denial and comfort. I'm pretty sure his last words to me were "go get 'em Char". At least that's what I choose to remember, because he said it often, encouraging me frequently. I needed it.

As part of that, I also never visited his gravesite. I think about it every year, and for some reason I just didn't want to show up, partly because I don't believe he's really there, and partly because it would lead to more self reflection than I want to make. As Stuart Smalley would say, denial isn't just a river in Egypt.

So this week I decided it was time. I drove out to the cemetery with Bear, parked and left Bear in the car, and started walking past dozens of headstones. There was a funeral in progress when I got there a few hundred yards away, which adjusted my mood a bit.

I remembered Dad's funeral was somewhere off a hill near some trees, but after wandering around I realized I wasn't going to find it unless I read every last headstone there. So I called Mom to find out, but she didn't answer--it's typically a dark day for her.

There has to be an app for this, I think. So I Google my dad's and the cemetery names, and lo and behold, I find a page with an actual photograph with GPS coordinates on it. And a map with the exact location pinned.

The map feature was very slow, so it took some maneuvering to understand the map, but after finding a road on the map that appeared to be behind the site, I switched over to Google maps to see if I could more easily understand this online cemetery map.

And it worked--I found it. Here's the link. 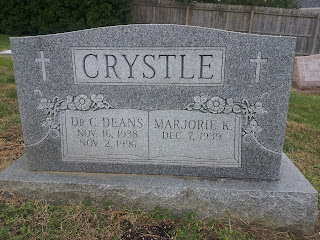 The rest I'll leave out; it was a somber, overcast November day today, very much like the day of his burial. But I'm glad I finally stopped by to say hello to my best friend, and noticed the potting soil in front of the gravestone, reminding me that Mom has been stopping there for quite some time.